Search for Marlboro homes for sale and homes in Marlboro. When it’s time to move, let us help you. Call us, Bunny and Art Reiman – Realtors. Whether you’re a buyer or a seller, or both, we can help you just like we’ve helped hundreds of other families find their new home.

About Marlboro Homes For Sale

Marlboro formed in 1848 using portions of Freehold. The town is named after marl , which was an early form of fertilizer. The first industry of Marlboro was the export of marl. Marlboro was the scene of a number of skirmishes during the Revolutionary War. During that time, Beacon Hill, the second highest point in Monmouth County, served as one of 23 state-wide warning beacons. These beacons were used to signal local militia of a British invasion.

Homes in Marlboro prices start at the starter home level however upscale detached single family homes  can easily exceed $1 Million in Marlboro. Marlboro homes are mostly single family homes, however there are also four main condo complexes in town. A section of Marlboro, Morganville, has a separate zip code, 07751. This section is in the northeast corner of Marlboro.

The 2010 Census showed there were 40,191 people living in Marlboro, in addition there are over 13,000 housing units.  A section of Marlboro called Morganville is in the northern part of Marlboro, and in fact, Morganville has it’s own post office and zip code. The Census also showed that the median household income was $130,400.

Education for K-8 students is provided by the Marlboro Township Public School District, which has 1 pre-school, 5 elementary schools and also 2 middle schools. When students enter high school they will attend a school in the Freehold Regional High School District.

The six high schools each offer a special curriculum for talented and highly motivated students. Any student in the Freehold Regional High School District is eligible to enroll and there is a competitive admission process. Some of the offered programs are Global Studies and Culinary Arts & Hospitality Management – among others.

Students also have the option of attending one of the five full time schools in the Monmouth County Vocational School District. Educations in the fields of Allied Health and Science, High Technology, Communications, Bio Technology and Marine Science & Technology are offered. Additionally, there are numerous shared time programs offered. Some of the offered programs are construction trades and Plumbing & Pipefitting – among others.

There are also many private schools in the area. 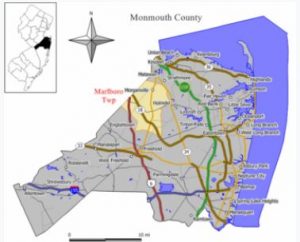 Because it’s easy to get to work, and there are so many options, commuters love living here. Many homes in Marlboro are within walking distance to the buses on the Route 9 corridor. If you’re further away, there are Park and Ride lots. However, many prefer to take the train to New York. New Jersey Transit supplies rail service from the Matawan station.

And if you’re not a commuter to New York, local bus service is also available on Route 9. All major roadways in the are are also easily accessible.

When it’s time to either buy or sell a home, call us. Call Bunny and Art Reiman – Realtors. Because, whether you’re buying or selling, we can provide you with the highest levels in real estate expertise and professionalism. Do like hundreds of our clients have done and contact us to guide you through the process!

Homes For Sale In Manalapan