[vc_row][vc_column][vc_column_text]Search the homes for sale in Fairview , an area of Middletown NJ. Whether you’re a buyer or a seller, or both, call us – Realtors Bunny and Art Reiman.

One of the many areas of Middletown, New Jersey, is Fairview. This community of single family, detached homes, is located east of Route 35, at the southern end of Middletown.  There are also two condo communities in Fairview. Those communities are at Cambridge Manor and King’s Landing. Middletown’s population is in excess of 60,000 people.

The beaches at the Jersey Shore are nearby. You’ll find many choices for shopping and dining. Easy access to the Garden State Parkway is available at Exit 114.

Homes for sale in Fairview, Middletown

The homes for sale in Fairview are mostly in the starter price range, most of them being built in the 1950s. Lot sizes are typically small. Many of these homes have a basement.

Students from Fairview will attend one of the 17 schools in the Middletown School District, which has a student population of over 10,000 students. There are also numerous private schools in the immediate area.

Part time courses are also available. Some of the course offerings are Marine Trades and Automotive Technology. 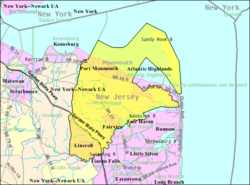 Commuters from Middletown will appreciate that they have a number of options to get to work in New York. Middletown has a train station the Seastreak ferry is nearby, and bus service is also available.

When it’s time to buy or sell a home in Middletown, call us. Call Bunny and Art Reiman – Realtors. Bunny grew up in Middletown, her father owned the Sunoco station on Route 35.  And we’ve lived in Middletown. As a result, we’re very familiar with the area. We’ve helped hundreds of families find their new homes in the area, and we can help you too!